MEASURE, a non-profit organization that uses data and education to mobilize communities to eliminate social disparities, today announced the release of an original and important comic book, Hey Sis! Be You! The story was created as a part of the Innocence Initiative to raise awareness of the national problem of the adultification of Black girls and provide parents with resources to advocate for their daughters.

The comic tells the story of Grace, a girl who becomes the first Black female president, and strives to embolden and empower Black girls to become the superstars they are. The adultification of Black girls is one of the most underreported issues in social justice. In all areas of life—school, work and beyond, Black girls are treated and viewed differently than peers of other races from as early as age five. The comic features both locally and nationally prominent Black women like Austin, TX District 1 Councilwoman Natasha Harper-Madison and Congresswoman Ayanna Pressley of Massachusetts. It was first released in the latest issue of Austin Women’s Magazine and will soon be available to the public. It is illustrated by Austin’s Lakeem Wilson. 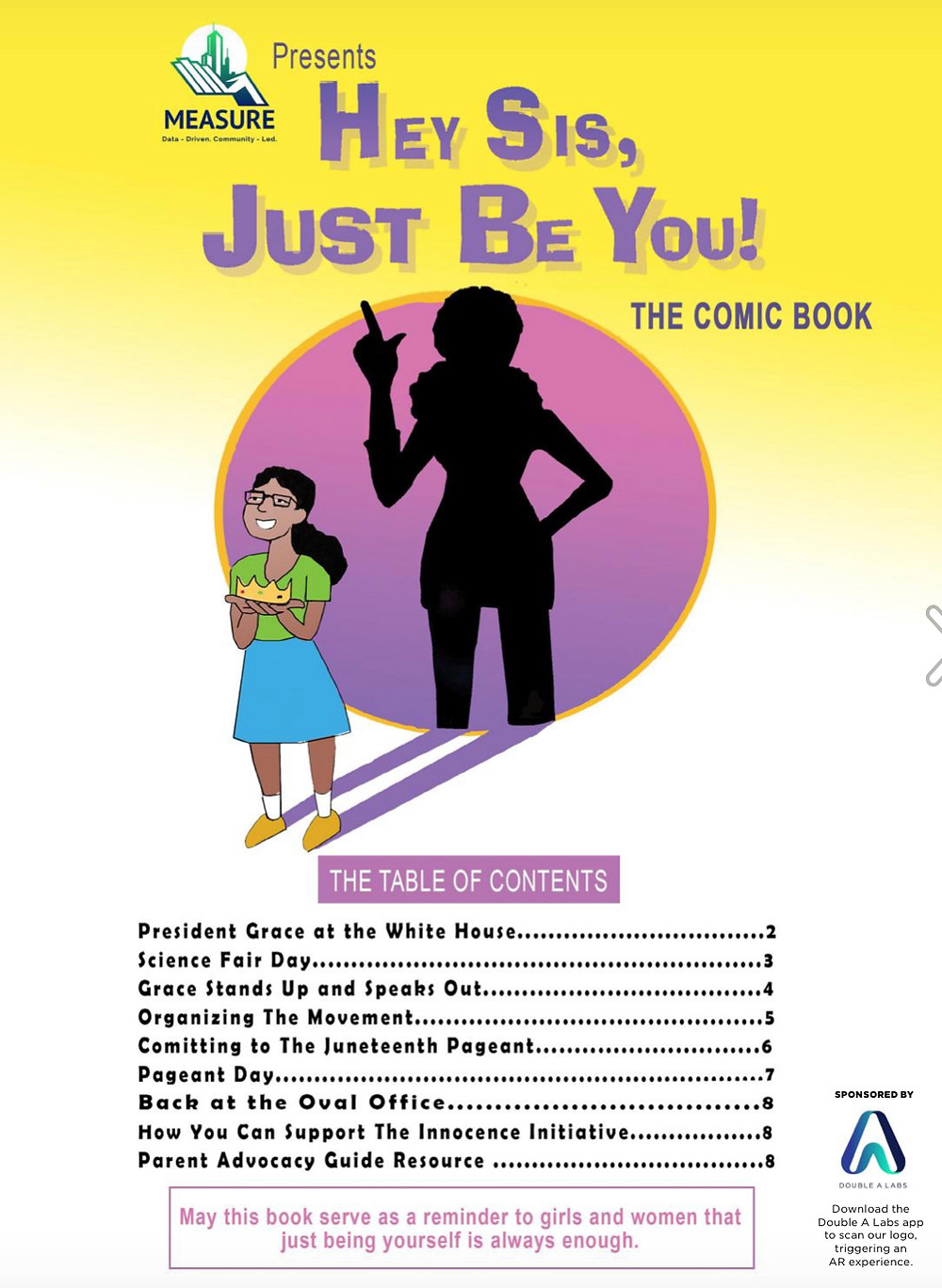 The societal stereotypes of Black people are applied to Black children and particularly Black girls, and the data is troubling:

“Adultification bias is real, and has been going on for hundreds of years,” said Meme Styles, Founder and President of MEASURE. “The data shows this is still prevalent today. We have not made progress on this front. With The Innocence Initiative we are working tirelessly to disrupt and dismantle this injustice through a variety of approaches. We hope Hey Sis! Be You! elevates the problem to schools and educators, equips parents with a new set of resources, and most of all, inspires young girls to unleash the powerful potential that lies just beneath their skin.”

The Innocence Initiative was inspired by the Georgetown Law Center on Poverty and Inequality 2017 report, Girlhood Interrupted: The Erasure of Black Girls’ Childhood, a data-driven exposure of the prevalent problem of adultification of Black girls. Rep. Ayanna Pressley (D-MA) has also introduced a bill titled “The Ending Punitive, Unfair, School-Based Harm that is Overt and Unresponsive to Trauma” (PUSHOUT) Act, to put an end to the criminalization of Black children. The bill has been co-sponsored by Rep. Ilhan Omar (D-Minn). The Initiative seeks to educate and empower parents, educators, school systems, and other concerned citizens on the issue through data, real-life stories, training, advocacy, and more.

“Ultimately, we believe that we are at a time, finally, where people in positions of influence are understanding all of the ways systemic racism affects the Black community beginning at a very early age,” says Styles.

About The Innocence Initiative

The Innocence Initiative is a collaboration that will elevate the data, listen to the real-life stories of Black girls, and address disparities that perpetuate adultification through advocacy, training, and a public awareness campaign. In order to eliminate adultification bias and change the narratives dictating how our children are viewed and treated, our community is driving 6 courses of action.

In November 2019, Impact Austin awarded The Innocence Initiative a $110,000 grant to advance equity for women and girls of color in Central Texas.